As I reported in our magazine, 2020 has been an extraordinary year in so many ways.  Our Summer/Autumn events were cancelled due to Covid-19 but we started the year with a well-attended AGM and ended with a socially distanced “Lighting of the Christmas Tree” in the Garden.  Singers from the Royal Opera House and West End stage sang a medley of festive songs, illuminated by a gold and silver Christmas Tree – whilst residents watched from the safety of their windows, balconies, doorsteps and pavements.

ECSRA certainly didn’t go into hibernation during lockdown and there was a proliferation of Zoom meetings and a flurry of new projects which we feel will enhance Earl’s Court Square.  ECSRA has applied, and been successful, in obtaining RBKC funding for two projects, both of which are financed by accumulated developers’ contributions: 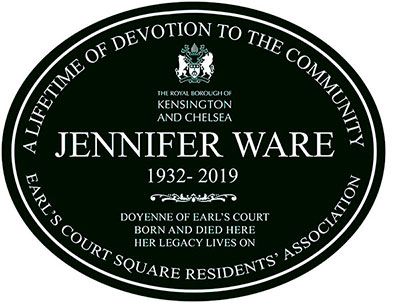 The first, from City Living Local Life (CLLL) of £2,301, is for 4 racing green plaques which will also bear the RBKC crest, to commemorate past residents whose lives have made a difference to Earl’s Court Square.  Initially these will be for Jennifer Ware, a doyenne of Earl’s Court Square who was born and died in the Square and Douglas Eaton, who was Father of the House at the London Stock Exchange and a Councillor for 33 years.  Both Jennifer and Douglas gave a lifetime of devotion to the Community and their legacies live on. We have also chosen to commemorate 2 people who made an impact in the international sphere - Dame Ninette de Valois, Founder of the Royal Ballet and Fuad Rouhani, First Secretary-General of OPEC who was also an Ambassador-at-Large and a writer and musician.  We are planning on a small reception in the Garden in September with their families at which our MP, Felicity Buchan, will unveil the 4 plaques to be installed on the buildings in which they lived.

The second project we are progressing has received £6,329 Neighbourhood Community Infrastructure Levy (NCIL) funding, also financed by developers’ contributions. This is for a row of 6 bespoke chamfered corner slate grey planters to be sited in the SE Arm of the Square - which we are hoping will prevent motorbikes, mopeds and cyclists taking shortcuts through the bollards onto Earl’s Court Road as they are causing problems for pedestrians.  Unfortunately, this project has been delayed as the Council Officers do not want the planters sited between the bollards and we are in discussions with the Council about a compromise solution with the planters now sited in a straight line on the pavement between the end 2 bollards. 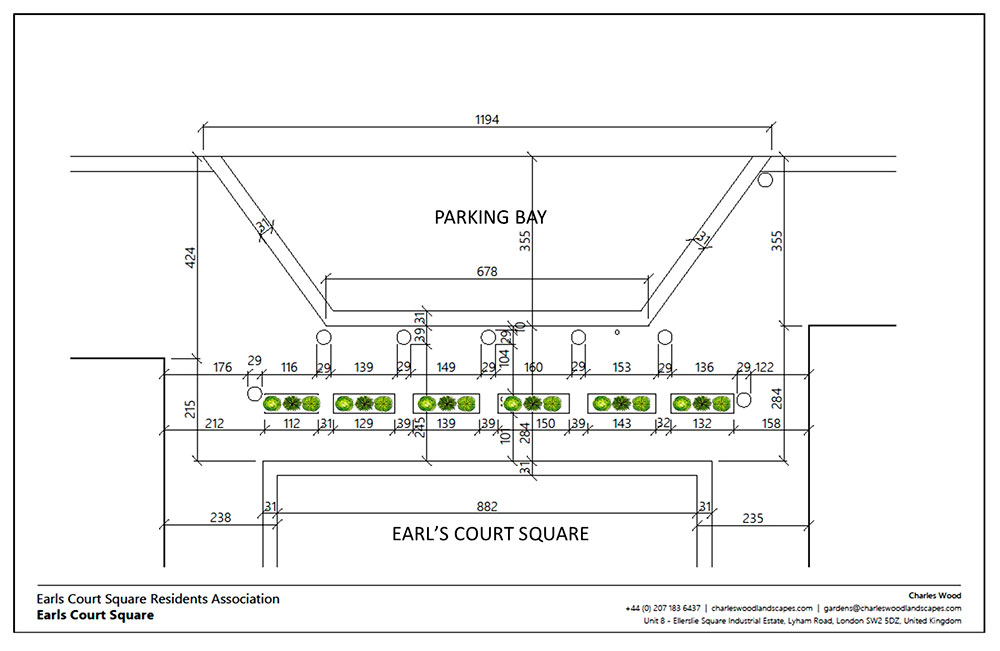 Since lockdown I have been approached by 18 residents regarding the provision of secure bicycle hangers - with each hanger providing 6 bicycle spaces.  Initially ECSRA was against bicycle hangers in the Square but with ever more people avoiding public transport and cycling to work, and increased bicycle theft, ECSRA identified two locations within the NE and NW arms of the Square where bicycle hangers could be sited which would not impact on the architectural integrity of the Square and Garden or necessitate the loss of a residents’ parking bay.  We have strongly objected to the Council’s recent proposal to locate a bicycle hanger outside 51 as we feel this would have a detrimental impact on the Square and the Garden.  We are in discussions with Council Officers to promote our proposals for 3 bicycle hangers to be located in the NE and NW arms of the Square. In the meantime, residents who wish to go on a Council waiting list for spaces should email cycling@rbkc.gov.uk. https://www.cyclehoop.com/product/shelters-canopies/bikehangar/. 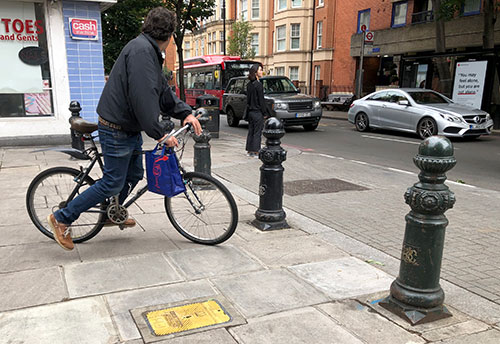 ECSRA has a balance of £1,424 in their Nicholson Fund which was provided by the developers of Matiere Place and has been used over the years for the enhancement of the Square.  The Executive Committee are now debating on the most effective use of these limited funds and have agreed the following guidelines:

1. That the Nicholson Funds should be used to facilitate enhancements to Earl’s Court Square, including the arms of the Square, but not beyond. It cannot be used within the Garden railings.

2. That work to individual buildings should normally be considered the responsibility of that building and that ECSRA should continue its work to encourage property owners to retain or revert to the original appearance. Conversely the fund should be there to pay for projects that would not be possible if left to individual owners.

We envisage using the very limited funds for encouraging the buildings to replace missing finials (and we are looking at whether ECSRA can fund a mould for these) and encouraging all the buildings in the Square to use a Garamond 7” black font for their numbers.  This is very much an on-going project for the Executive Committee and we hope to reach some conclusions to help achieve our aims during the course of the year.

I do hope that you have all received a copy of ECSRA’s annual magazine.  This is a mammoth undertaking for Sue Lupton, who edits the magazine and miraculously manages to get the adverts to cover Judy Head’s professional costs each year, and we owe a huge thank you to Sue for undertaking this voluntary work and to John D Wood & Co for the sponsored printing. Sue has asked me to point out that there is a History Quiz competition (compiled by Christine Powell) which expires on the 28 February with a prize of a bottle of champagne or chocolates.  So far there has been no response – hopefully it’s not too difficult – so please do have a go!

ECSRA’s other means of communication is our website, which is maintained professionally and updated regularly by Judy Head with input from Sue and I. In the past there were problems with tricky passwords - but the passwords have been done away with and the website is easily accessible now and has lots of interesting information about the Square and local matters. Please do all have a look – there really is something for everyone on www.ecsra.co.uk.

Due to the pandemic and the reduction of short-term lets, rubbish dumping on the Square has decreased, thanks to the efforts of Heidi Bradner and her Team of residents who report illegally dumped bags.  The Council prefers you to use the online form as this generates a case report for the resident who is then informed of their investigation reports.  Sadly, there are a few areas which remain “hotspots” though Heidi contacts the building managers to try to find solutions.

As I reported in the magazine, Kenway Road Police Hub closed last October, and The Earl’s Court Safer Neighbourhood Team is now based at Kensington Police Station.  Earl’s Court has had a 19% reduction in crime with 1,180 crimes reported over the period December 2019 to November 2020 compared to 1,459 in the preceding 12 months with the peak month being June 2019 (159 crimes).  Earl’s Court had 90 drug offences during the last 12 months with a 30% reduction from 128 offences in the previous 12 months.  There was also a 33% reduction in burglaries and a 36% reduction in robberies. Despite these figures, the residents of Earl’s Court Square have been subjected to anti-social behaviour problems with people sitting on the steps of buildings drinking and taking drugs which residents have found increasing intimidating.  There have been break-ins and thefts of motor vehicles – and, this week during lockdown, residents have complained of weekend partying and loud noise from a top floor flat of a building facing the Garden in Earl’s Court Square. Fortunately, the Police are dealing with this flouting of Covid regulations.  Earl’s Court has been recognised as an “enhanced” Ward due to its ASB problems and, after help from our MP and much local lobbying, we now have an enlarged Earl’s Court Safer Neighbourhood Team comprising 1 Sargent, 4 PCs and 1 PCSO. The Police are working with the new RBKC Wardens and you should notice an enhanced Police/Warden presence on our streets.  I have circulated a “Community Safety Survey” to Members with the AGM Notice which the Council would appreciate your views on to assist them formulate community safety policy going forwards. https://consult.rbkc.gov.uk/communities/community-safety-survey/

I feel sure that residents would like to see an increased use of CCTV to fight crime as the present RBKC restricted monitoring hours are ineffective. 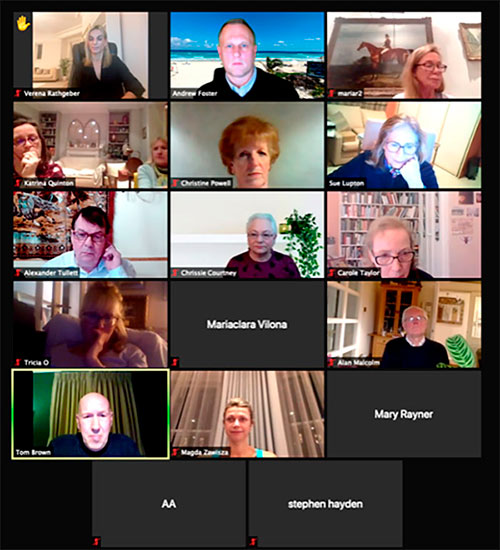 Alex Tullett (our Honorary Treasurer) in addition to doing all the accounts, is kept busy reporting and responding on all planning, traffic, parking and licencing matters on behalf of ECSRA and I am particularly grateful to Alex for his advice and assistance dealing with all ECSRA matters on a day-to-day basis.

We have a new Membership Secretary, Christine Powell, who has asked me to ask everyone to please remember to renew their 2021 memberships and advise her on ecsramembers@talktalk.net.  The membership subscriptions remain at £8 for individuals and £12 for families/household so please don’t forget your transfers - as we need them.  If you would rather pay be cheque or cash, please let Christine know.

Finally, I would like to thank all 9 of my colleagues on the ECSRA Executive Committee for their help and advice during 2020 with a particular thank you to Andrew Foster who has hosted tonight’s AGM. We are also grateful to our Ward Councillors, Hamish Adorian, Malcolm Spalding and Linda Wade who are always ready to assist and to Katrina Quinton, Chairman of the Earl’s Court Square Garden Management Sub-Committee for her continued support, and we look forward to resuming “service as usual” once lockdown is lifted this summer.