A WATCHING AND ACTIVE BRIEF

Having successfully formed the Earl’s Court Square Residents’ Association in 1974 to fight to keep the
facade of Numbers 43 – 47, the job of protecting the Square and enhancing conditions for the
residents continues 40 years on. One of the earliest main achievements of the ECSRA was to get the Earl’s Court Square Conservation Area created.

The ECSRA organises events for residents of the Square and campaigns tirelessly on topics such as local redevelopments, planning and licencing, after school parking, rubbish, noise and nuisance. We produce an annual magazine (our thanks to John D. Wood for printing our magazines) and a website.

When the Earl’s Court Square Residents’ Association (ECSRA) was formed in 1974, there was a solicitor and barrister in the Square, committee members, who helped form the rules of the Association.

Between the committee, the volunteer legals and the ward Councillors who had experience with other Squares, they laid out the OBJECTS of the Association as being strictly ‘non-political’ and ‘non-sectarian. The Executive committee signed up to the rules and they exist to this day.  They defined the area of the Association as Earl’s Court Square and its environs. What the responsibilities were, the number on the committee, voting, official duties like the Management, Treasurer, Audititor, and the General Meetings were also thought through. Any alterations of the rules was also covered. Two years later in 1976/7 It was decided that an independent Garden Square Sub-Committee should be formed to solely look after garden matters. 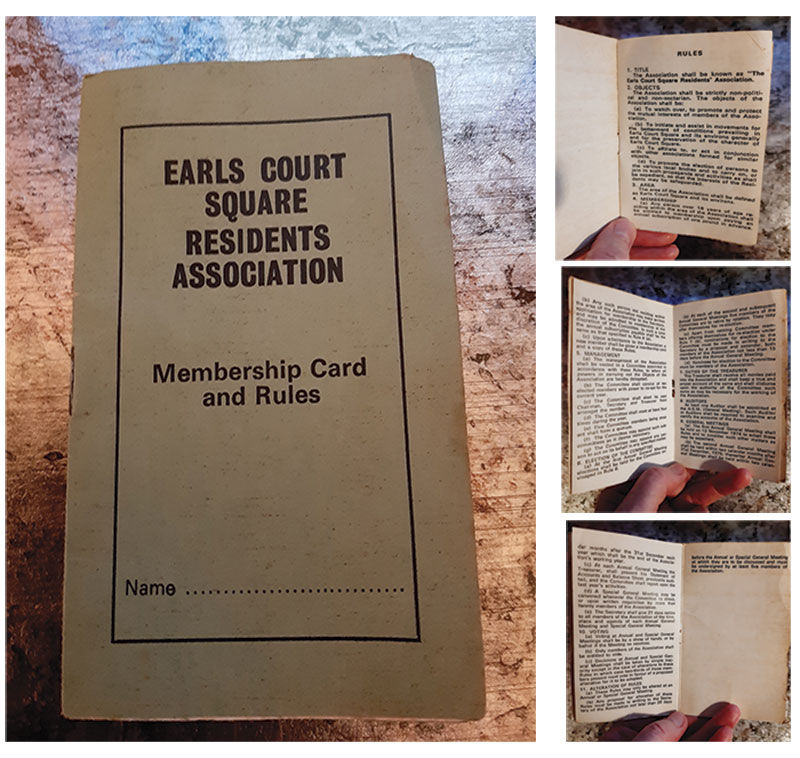 The preservation of the architectural integrity of the Square

1.1. The painting of the garden wall of number 1 Earl’s Court Road was lobbied for and achieved along
with the improvements of the terrace from number 1 to Waterstones (now M&S). Council owned, 282
was painted magnolia in line with the other buildings.

1.2 Cable boxes and signage were all challenged for size conformity and light pollution along the Earl’s
Court Road, which had an impact on the shops. Success was achieved by our very active Chairman at the time, as part of a wider group.

1.3 Graffiti was a big issue in the 90’s and the committee prevented escalation.

1.4 Planning applications are always monitored. Examples are, objections to 3-story rear extensions, but
approving 5 flat conversions. Objecting to a 24 vehicle car park in Rich Lane at the back of Redcliffe
Close. Change of usage of buildings that will affect the Square.

1.5 The ECSRA Committee worked hard to support the preservation of our National Heritage. Local
monitoring of properties was pressed for through English Heritage and the Council.

1.6 Queens Court, 25-27 Earl’s Court Square, repairs to unsightly portico which suffered from war damage
lobbied for and fixed from the Nicholson Estate financial contribution, but the round pillars were
sadly not achieved. Further contribution from Queen’s Court residents was unrealistic.

1.9 The reinstatement in the original style of black and white tiled entrances to several Dutch-style houses,
paid for by the developer of Matiere Place (Nicholson Funds) after negotiations between the ECSRA and the Council.

1.11 Arranged for uniform numbers on 30 properties in the Square, using Nicholson Funds.

1.12 Protected the original coal hole covers when repaving work in the Square was being done. Alerted the
rest of the Borough to do the same, thereby no modern reproductions were used.

1.13 Lobbied the RBKC for York stone repaving the Square.

1.14 Monitoring the pollarding of trees.

1.15 Felling of the tree behind Langham Mansions to be replaced.

1.17. ECSRA continues to liaise with the Council on matters affecting the Square

The easing of traffic and parking problems.

2.1 Protect the red-routing in 1993 for the Earl’s Court and Warwick Roads. Views were invited from the
ECSRA committee for protection from the inevitable increase in traffic activity ‘rat-running’ through
the Square.

2.2. Road humps came and went in the Square.

2.3. Clamping and towing an issue with exhibition visitors in the 1990’s

2.4. Parking control hours monitored and catalogued and the gathering of residents’ experiences to reach a
solution with the Council.

2.6. Supported the first comprehensive cycle route in the Royal Borough passing through the north side of
the Square in 1992

2.7. Experimenting with the traffic flow in the Square and contributing feedback from residents.

2.8  After much persuasion with Transport for London, we got the yellow-hatched box painted in Earl’s
Court Road to keep the exit clear. The green light is not long enough to exit the Square with Red
Route traffic.

2.9  ECSRA works hard to keep the pavements free from rubbish and encourages recycling.

2.10 Prevent coaches and large vehicles using the south east arm of the Square to access the Exhibition
Centre from the Earl’s Court Road.

2.11 Asked the Council to carry out a survey for dedicated parking space for bicycles and motorbikes.

2.12 Campaigned for traffic flow in the Square and minimising congestion zone charges.

2.13 ECSRA continues to liaise with the Council on matters affecting the Square

The enhancement of residential amenities

3.1 Chelsea Hotel a thorn in the flesh for many years, by not abiding with the standards of the community.
Committee constantly monitored use and disruption of antisocial behaviour, pressed for fines and
changes.

3.2 The ECSRA successfully challenged the licensing at the Town Hall, objecting to the number of
auditorium events held each year at the Exhibition Centre.

3.3 Building insurance: Freeholders were advised to take out special buildings insurance to cover against
terrorism, as Earl’s Court was deemed a high risk, due to the Exhibition Centre.

3.4 Gathering petition signatures for closed circuit television in the Square.

3.5 .Collecting the money for the hanging baskets in the South East arm of the Square.

3.6 Watchful brief and action on a number of occasions Thames Water pressure has been inadequate.

3.7 Participating in night time audits at the request of the Council and Safer Neighbourhood Police.

3.8. Liaison with the police on community safety and crime.

Providing social events for residents of the square

4.2 During 2016 we held our first Members’ Only event, a Spanish Evening, and with the Earl’s Court Square Garden Sub-Committee jointly hosted a Tea Party in the Garden Square to celebrate the Queen’s 90th Birthday. The ECSRA organises the annual BBQ/Disco, the Lighting of the Christmas Tree event, and holds an AGM