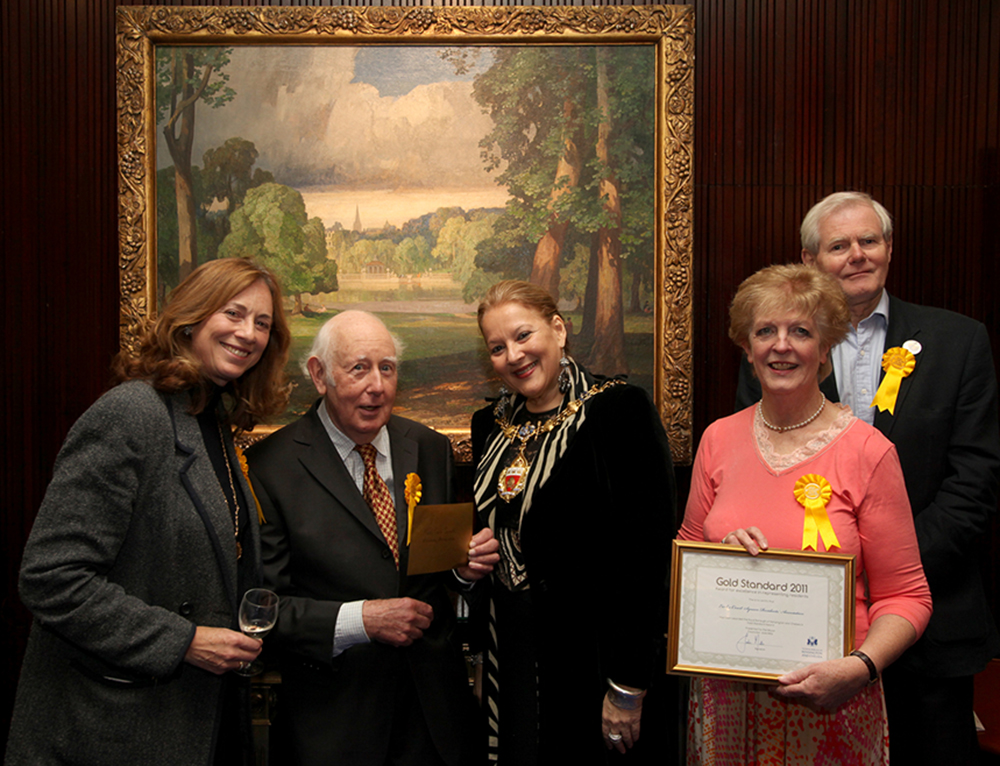 Earl’s Court Square Residents’ Association (ECSRA) was formed nearly 40 years ago, following a development
company acquiring a block of houses in the north west arm of the Square with the intention of demolishing
them and building high-density flats regardless of the effect this would have on the appearance of the buildings.
Earl’s Court Square became a Conservation area in 1978. Most of the properties are late Victorian white stucco
fronted houses. The southern terrace is of Grade II listed 'Dutch' style houses and there are three distinct
mansion blocks, Herbert Court, Langham and Wetherby Mansions.

Our mission is:
• the preservation of the architectural integrity of the Square
• the easing of traffic and parking problems
• the enhancement of residential amenities
• providing social events for residents of the square

There is an Executive Committee of up to ten people, half of whom retire each year. We also have a group of
over twelve willing volunteers who help with the newsletter and social events.

We view all planning and licensing applications pertaining to the Square and support or oppose as appropriate.
We also work with the RBKC concerning the rubbish, which is habitually dumped on the pavements.

We hold an Annual General Meeting each year, usually in February, to which everyone in the Earl’s Court
Square Conservation Area is invited. There is a Guest Speaker and after the formal proceedings, there is time
for informal discussions over drinks and refreshments. 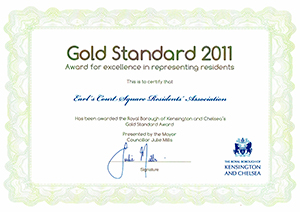 An annual magazine (previously with two members' editions as well) is published each year, before the AGM, which is delivered to everyone in the Earl’s Court Square Conservation Area.

Three social events are held each year, the Annual Barbecue/Disco and the Christmas Tree Lighting, both of which are held in the Square Gardens, and a Members' Event in the autumn.

We paid for house numbers to be painted on the columns of the stucco fronted houses and we encourage residents to ensure that they are repainted after any renovation work.

After lobbying the Traffic and Highways Department, a dedicated parking bay for motor cycles was created in the south east arm of the Square early in 2011.

We have held Street Meetings with the local Police and licensing authorities to listen to the concerns of residents affected by disturbances caused by nearby licensed premises.

Regular ‘walk abouts’ are held in conjunction with Ward Councillors, Council officers and members of the local police between the hours of 23.00 to 01.30 to identify areas of anti-social behaviour, noise, rubbish, dumping etc.

We lobbied Thames Water last year when many of the properties were suffering from lack of water or low water pressure.

The Square has been used for filming including ‘Not a Penny More, Not a Penny Less’ and ‘Tony Hancock’.  An interior of one of the buildings was used for a film about the disappearance of Shergar, the racehorse.

We carried out an inventory of the coalhole covers in the Square and lobbied RBKC to retain them when the
paving stones were replaced.