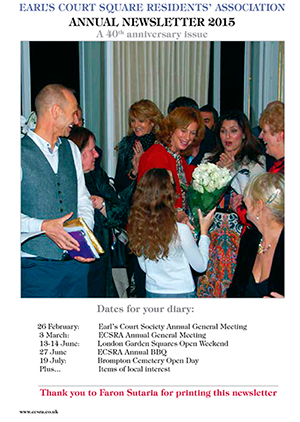 We had an historical write up from Melvyn Jeremiah an original ECSRA committee member, on the early activities of the committee. It originally being formed to fight a pair of brothers, who were buying up substantial properties to convert into rabbit-hutch bed-sits.

Attending the 40th Celebration party were original committee members Jennifer Ware, David Ramsden, Victor and Simone Smith, Rodney Brangwyn and Melvyn Jeremiah. The late Douglas Eaton was represented by his two daughters who grew up in the Square, one of which was Caroline Welby the wife of the Archbishop of Canterbury. Caroline was our speaker, along with the broadcaster Evan Davis. Jakob and Teena Stott the owners of ‘Poets House’ kindly opened their home to the residents for the grand occasion. Pages 4 – 7 in the newsletter.

At the 2015 AGM Christine Powell, Chairman, reported on all the properties that were being decorated and renovated. Request was made for all numbering on the buildings to be in a black Garamond typeface and 7” in height.

A rubbish and recycling focus was on cellar doors where rat infestation was being reported. Some doors had been blocked by builders scaffolding preventing rubbish being collected. Other notable issues were hatch box markings being perused with TfL to help facilitate cars and bikes exiting the Square onto the Earl’s Court Rd. Also the closure of the Earls Court Exhibition Centre after 77 years 1937-2014. Plus the Brompton Cemetery now owned by Royal Parks, was awarded a £3.8million pledge from two lottery funds for restoration work at Brompton Cemetery.

We profiled Earl’s Court Square resident Mike Laslett-O’Brien talking about the one time local rock ‘n roll scene in our area during his 25 years as a roadie. His mother Rhaun Laslett-O’Brien through her vision and spirit conceived the Notting Hill Carnival in its start-up days of 1965. Page 15.