A CELEBRATORY EVENING at the POETS HOUSE

The Rt. Hon. Sir Michael Rifkind QC MP, Shadow Secretary of State for Work & Pensions and for Welfare Reform,  joined us at the Poets House at 21 Earl's Court Square on Wednesday 12th October 2005.  As our local MP, he came to talk informally, answer questions and draw the raffle.  Food and wine was served.  The Poets House is owned by Jakob and Tina Stott, who were our hosts for this event. 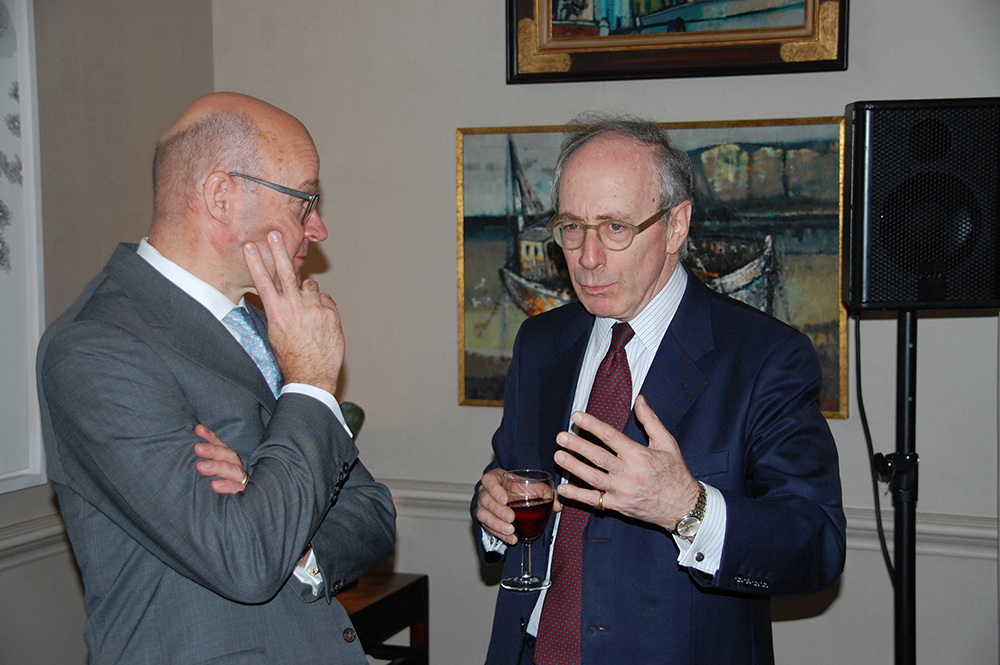 One can think of several reasons that could have inspired the Executive Committee to embark upon this. Figuring prominently, of course, was the successful nomination and election of Sir Malcolm Rifkind as our Member of Parliament. No less important was the celebration of that success and to congratulate our new Member and pledge our support for the future. But what is it about meeting our MP? Two years ago, we entertained Michael Portillo and within ten days he announced his resignation as our MP. This time, Sir Malcolm announced his withdrawal from the Conservative Party leadership challenge the evening before he came to meet us. In answer to an impertinent enquiry, he did admit that he had had the best night’s sleep for some time!

Talking of support, that of our members was overwhelming. Our built in Committee human computer, David Ramsden, (Honorary Treasurer) was counting the arrivals through the street door ‘fit to bust’ as the Geiger counter (!?) flickered back and forth around the one hundred level recording the arrival of members and their friends. It was by far the highest figure achieved in any such meeting ever held by the Association.

We squeezed into the Stott’s wonderful drawing room and mixed not only with Sir Malcolm but also our current and immediate past mayors, Cllr Warwick Lightfoot and the ever ebullient Cllr Barry Phelps, our ward Cllr Terence Buxton, and rubbed shoulders with the recently appointed Head of our local primary school together with her deputy and one of the Governors. It was also most encouraging to meet representatives from several of our neighbouring Residents’ Associations. Only the photographer from Hello magazine was absent, although Yasmin Stott was seen doing an excellent job as a stand in.

The Acting Chairman of the Earl’s Court Residents Association, Christine Powell, thanked the Stotts for their astonishing hospitality and introduced Sir Malcolm. In previous governments he had held several key posts including the Foreign and Commonwealth Office, Defence and Transport. It was perhaps the latter that enabled him to receive his loudest cheers for an intemperate attack on the iniquitous extension of the Congestion Zone, causing maximum nuisance and ambiguity to ECSRA members.

After the raffle draw, a vote of thanks was delivered in his usual egregious style by Douglas Eaton.

We would like everyone to know how much this very successful event owed to our hostess, Teena Stott: mastermind, administrator, chief security organiser, wine and food provider, to mention just a few of the good things on offer – all put together against a fantastic background of luxurious comfort and the willing service of her staff. We record our grateful thanks to her.