Sheila loved living in Earls Court Square. She moved with her Mother and aunt and cousin, Doreen, in 1962, to number 38, one of the Dutch houses.

Sheila died in 2010 aged 92 - she was rather grand but never a snob – she had been brought up with servants and Victorian nannies, in grand style and had lived an amazing life, yet she was friendly and always wanting to help. She had a sunny smile whenever you saw her.

Sheila spent her childhood in Bermuda and Gibraltar and then lived in India between 1934 and 1940. When she arrived in England and signed up as a nurse, she had never even been into a kitchen and ‘had to learn fast’ when her first assignment was to cook breakfast for an entire ward of soldiers. Her war years lead to many adventures including driving an ambulance around central London during the Blitz, joy riding in American flying fortress bombers, taking rides in British fighter planes to go to parties and later, joining SOE for the last two years of the war. She worked at Bletchley Park and Thame Park and, like so many of her generation, rarely spoke of the work she undertook there.

She also suffered many tragedy’s including the death of her great love who was a pilot and she was traumatised after being sent to Dresden in 1945, five months after it had been firebombed. After the war, she joined the Foreign Office and worked in Military Intelligence. No one in her family ever knew what she actually did in the F.O. until one of her old colleagues revealed all in her funeral tribute. She was a proud member of the Special Forces Club for the rest of her life.

Sheila also loved antiques.  Christine Powell says, “I used to help her when she set up her stall at various antique fairs.  She would load up her car the evening before and we would leave early in the morning.  I was concerned about her carrying all those bags and boxes.  We would unload and everything had to displayed, just-so.  It was quite a social event as many of the stall holders were regulars.  At the end of the afternoon, we then had to repack everything, load the car and then store everything back in her cellar.  I don't remember any wet days so that was good.  In the summer, she would sit on her porch so ideally placed for her Neighbourhood Watch work.  In a round-about way, she most probably influenced me to do my Young Offenders work.  Her brother came to stay with her every year, and he was interesting to talk to.  He lived in Kenya and was a Game Warden.”

By the early 1970s the square had fallen into a sorry state. Many of the houses were empty and several had squatters living in them. This led to repeated outbreaks of fires, as the squatters used to break up floorboards and light fires to keep warm. The garden had no fence around it, and Sheila was often prompted to intervene when large groups of drunken men would play football at weekends, damaging what few shrubs and plants were left. At the same time, there were many long standing residents whom she befriended, including the Gandalls and the Latters, the Fairs, the Smiths, the Wares, the Henleys and these connections gave the square a wonderful feeling of community. So it was natural that when Jennifer Ware and other friends began the idea of a Resident’s Association and a Garden Association, Sheila became enthusiastically involved. Apart from her dynamic involvement in the Residents Association from its outset she also had a great enthusiasm for the Neighbourhood Watch Scheme from its earliest stages. Her time in MI6 had given her an informed eye for people and a sixth sense for trouble.

Lottie Henley says she remembers Martin her son on the piano and Sheila having passers-by stop and chat to her. Always welcoming. From her vantage point, in her drawing room and sunning herself on the steps of her ‘Dutch house’ home in the south side of the Square, she could tell you who owned which car, who was away, who wasn’t well and a wonderful ‘eagle-eye’ along with her neighbour Sandy, for the Neighbourhood Watch, which she did for some 30 years. 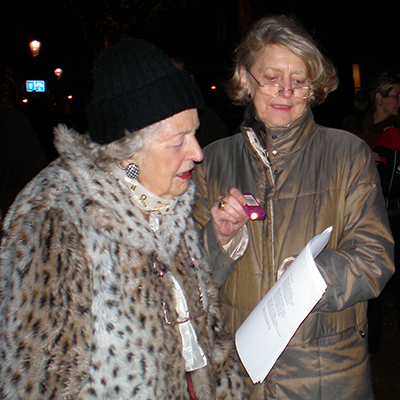 She was a volunteer hospital driver for fifteen years, continuing to weekly ferry people to and from hospital until she was in her late 80s. Her principle personality trait was her love of people. She was endlessly curious about people and what made them tick and loved hearing their stories. She was friends with numerous people in Earl’s Court from all walks of life. Christmas would see her house full of people, many of whom had no family. She was a person who people liked to tell their stories to and often she would sit out on her doorstep and chat to passers-by. For her, it was the people of the Square that made living here such a pleasure. The idea of community based on the relationships between neighbours was dear to her heart and she certainly did her personal best to contribute to the interwoven fabric of the people around her. Twice a year in her hay-day, she is remembered as helping to arrange a Christmas and summer party in the Square. It was Sheila’s life’s purpose to make people happy.